The world is everchanging, and we notice this in the news. What does the media tell us, and what can be considered truth and what is misinterpreted?

Grazing livestock can save the world!

An extremely bold claim to say the least. [11] But not entirely unfounded. It is true that it feels like livestock removing vegetation is the least likely solution to fight desertification of the world. However, goats (lets go with goats) trample, fertilise, trample, and til the ground while walking over it. Most ways to solve climate change, or human caused environmental effects, form by trapping carbondioxide yet to be released into the atmosphere, or that which has been released. Exactly what plants already do. So if we can increase the biomass of plants, we can solve a piece of this puzzle.

The differences between ungrazed and grazed grasslands are staggering. Just look at the picture to the far right. The left one is with grazing, the right one is without grazing. Both share the same climate and the same soil. 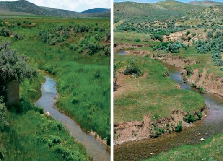 So volkswagen was caught cheating during a test. Nothing unusual about it, companies cheat tests all the time. But to have build in programs to provide false results, that is a new one. Emissions of NOx were tested to be 15 - 35 times higher than allowed in the Jetta and other models. Many other cars failed to meet NOx emission standards, which was promised by the manufacturer to people who bought the car. All of this was part of proving that modern diesel engines were every bit as clean as gasoline. [12] This statement is now in jeopardy.

The graph on the left shows the allowed emissions (the left), and the actual emissions (right) on the Diesel VW Jetta, Golf and Beetles.

How much of a scandal is this ecologically. It is mainly a prestige scandal for the brand.